The LP-E8 is the official Canon EOS Rebel t3i Battery. It works with the Canon T2i, T3i, T4i, or T5i cameras.

It is a lithium-ion battery and has no memory effect, so partial discharges and charges do not affect it's memory capacity. That means you can charge after each photo shoot to insure it's got a full charge for the next time you want to take photos or video with your Rebel t3i. 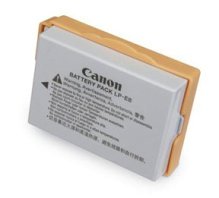 Here are the specifications for the Canon Rebel t3i battery.

New OEM (OEM is the abbreviation for Original Equipment Manufacturer) Canon battery and any new replacement batteries will last a long time, particularly with shooting regular photos while using the optical viewfinder.

You have three options other than the LP-E8 batteries to power your Canon T3i camera. 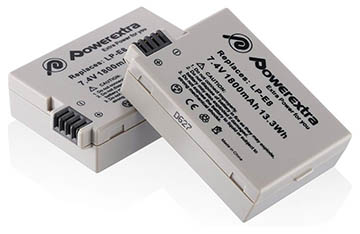 The alternatives to the Canon batteries are much more affordable. At the time of this post update, you can buy a pair of these Powerextra batteries for less than $14.

You can also purchase them with higher capacities than the standard 1120 mAh so they will last much longer than the originals.

I won't recommend a specific alternative right now, because there are so many good ones for the very popular T3i camera.  I buy all of my spare batteries from Amazon because of their liberal return policy, good prices, and their un-matched customer service reputation. 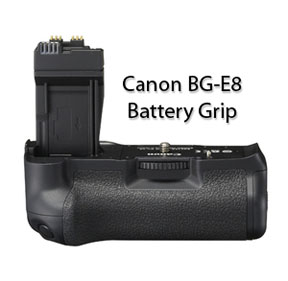 The Canon T3i battery grips and their alternatives can be loaded with two batteries to double your shooting capacity.

They also give you comfortable access to vertical shooting camera settings and will give you a better balanced feel when shooting with a long lens attached to your T3i.

Here is more about the BG-E813 Battery Grip for the Canon T3i.

The ACK-E8 is a power adapter the plugs directly from your AC electric outlet to your camera. These are great for studio work and inside photography where you have electrical outlets available.

Once again, going with a third party is the smart thing to do here.  You can save quite a bit of money by going with a non-Canon power source.

Just make sure the accessory specifications match the camera's power needs, buy from a reputable seller, and read the reviews of other buyers first.

The most important accessory for the LP-E8 or equivalent battery is a working charger. Canon's version is the LC-E8E. Lithium batteries are so easy to use because of their ability to be charged at any stage.

It was not too many years ago when re-chargeable batteries were ni-cds(nickel cadmium) and had memory issues. If not fully discharge and then fully re-charged, they would "remember" to stop charging before they were at full capacity, thus diminishing their shooting capacity.

You can find all of these alternatives, adapters, and other Canon t3i accessories and more importantly reviews of these products here: Canon t3i Batteries and Accessories

The Canon t3i is really a great camera for many reasons, including the number of accessories available.  It is a great time to be interested in photography.  Technology has brought so many useful and powerful tools to our disposal.

Have a blast shooting your Canon!