Have you made the same mistake?

The Canon t3i vs t4i analysis, like other camera comparisons, often erroneously comes down to only looking at numbers like megapixels and price tag.

Don't get me wrong.  Numbers are important and objective specs on cameras are useful.  It's just too easy to put so much emphasis on numerical data and forget the subjective data. 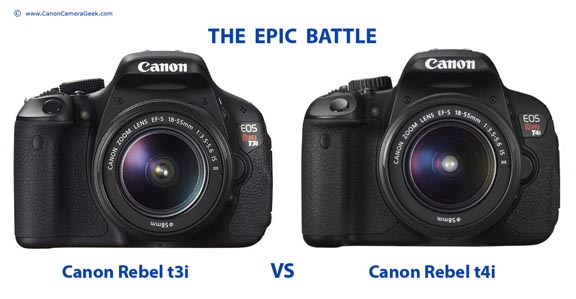 Rather than focus on the specifications of the cameras, I thought it might be fun to compare the Rebel t3i and 4ti cameras by analyzing their popularity in terms of sales and customer reviews.

I've included the specs on the t4i and t3i later in this post for those photographers who are numbers-oriented but I wanted to start the comparison differently for a change.

Subjective views, especially if there are many of them give us a perspective that is based on real live experiences with camera equipment rather than a view that is based on scientific tests done in a lab by a professional reviewer.

There is another great source to tap into for research on the Canon t3i vs t4i debate.There is not enough time in the day to evaluate all of the cameras and accessories myself as a one man operation.

I also gather and evaluate the reviews and opinions by the common everyday snap photographers and photo enthusiasts who have a large combined amount of time using their photography cameras, lenses, lighting gadgets, and related camera accessories.

The King of On-line Retailers

If you've read more than a few of my posts on the Canon Camera Geek site, you know I am an Amazon addict, not only has a frequent buyer but also as a committed reader.

What have I purchased?  Nutritional products, a ton of books, gifts for friends and relatives, computer accessories, a waterproof safe, camping gear, household products and of course lots of photography accessories.

I am now a Amazon Prime member.But enough of all that.  What about the Rebel t3i vs t4i comparison?  Here is what I found.

I did my normal in-depth reading of many reviews on both cameras and looked at the review numbers.  I calculated my own Canon Geek 4-5 rating index and here are the results:

These are both outstanding cameras with a lot of raving fans. The Canon t3i also had twice as many reviews, indicating that is substantially more popular in terms of total number of actual buyers.

The Practical t3i vs t4i Differences

The t4i produces slightly sharper images only because of the Digic 5 processor.  If you do any post-capture image sharpening on your own, than this difference simply does not matter.

If you don't want to adjust any sharpness on the images that come straight out of the camera, then this comparison matters.

The t4i has a faster frame rate of 5.0 frames per second vs 3.7 frames per second.  That's 35 % faster.  If you are shooting any action sequence photos this is an advantage in favor of the Rebel t4i.

Comparison of the Canon t3i vs t4i specs

They both have an 18 megapixel sensor, the LCD screen size is the same, they are the same size and weight, they have the same number of auto-focus points, and the video resolutions are the same.

Closing remarks on the Canon t3i vs t4i discussion:  You can't go wrong with either of these Canon cameras.  For opinions other than mine, pour yourself a beverage, prop up your feet, get comfy in your computer chair, and read some more thoughts posted on Amazon: