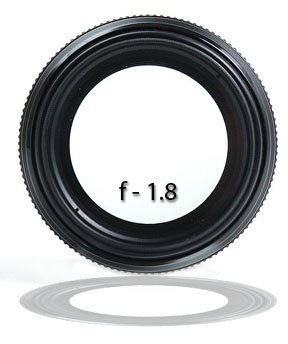 Camera settings can be confusing, but this basic guide to Canon camera aperture will help you slice through the confusion. This post will help you understand what an aperture setting on your Canon camera is, what aperture priority mode is and explain why aperture is so important to control.

This post also includes a Frequently Asked Questions section (FAQ) and a short video from Canon that gives you a great explanation of aperture.

Knowing how and why to change aperture settings on your Canon will help you improve your photography and take better photos, and we all want that. First, we look at what lens aperture is.

What Is Aperture On a Canon Camera

F/stop numbers are at first confusing, but are easier to understand if you remember this one thing. Smaller apertures have bigger numbers and larger apertures have smaller numbers. That seems up side down, but f/stops area actually fractions.

To help you see how aperture and f/stop number are related look at the diagram below. If no other camera settings are changed at the same time, you can see that exposure goes up with larger apertures.

Smaller "f-stop" numbers are larger apertures.
An f/4 lens opening is much larger than an f/16 lens opening.

Why Aperture Is So Important

Aperture is important for several reasons. It makes a big difference in how much light can enter into your camera through the lens.

DEPTH OF FIELD. Using smaller apertures gives you greater depth of field, meaning more distance behind and in front of your focusing point will be in sharp focus as well.

How aperture affects depth of field

SHUTTER SPEED.  Aperture choice affects what shutter speed you use. If you narrow the lens opening, you'll have to use a slower shutter speed to allow enough light in for a proper exposure.

IMAGE QUALITY. Depending on the specific lens you're using, lenses do produce some loss of image quality and both ends of the aperture scale.

If you've already done a little research on camera settings with your Canon, you've likely seen terms such as stopping down or opening up with regards to your Canon's aperture. Stopping down means reducing the light passing through your lens and opening up means enlarging the opening.

There are several different ways to set aperture and control the size of the opening in your Canon camera lens. The size affects how much light can enter the camera and hit the sensor in a given amount of time (shutter speed). 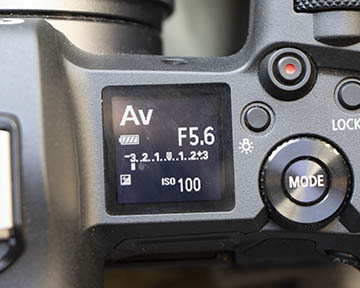 Aperture Priority on Top of Camera 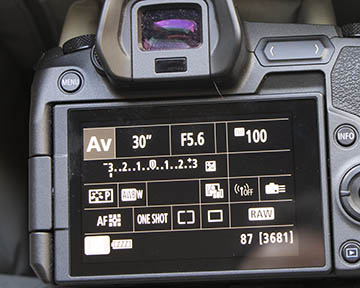 The aperture can be adjusted on your camera to make different sizes of lens openings and the shutter speed or the ISO can be adjusted at the same time so that the overall exposure does not change and you still get a well-exposed photo.

Just like other modern DSLR and mirrorless cameras, Canon has both manual and automatic camera settings that controls the size of the lens opening. Aperture mode is one setting I use more than any other-more on that in a minute!

Whether it's called Canon aperture mode, aperture priority mode, or simply aperture priority, it's an auto-exposure (AE) setting where you set the f/stop number and the camera will select the right shutter speed to get a properly exposed photograph.

Canon aperture mode is an automatic exposure mode where you set the aperture manually and the camera automatically determines the best shutter speed to use to give you a good exposure. Aperture priority is the best setting to use when you want to control what's in and not in focus in your photo.

What does aperture mode do? In addition to controlling the amount of light coming through the lens, it also gives you control of the range of things that will be in focus (depth of field) in your photo. On some cameras it's designated with a capitol A. On your Canon camera it's a capitol A and a small v like this Av.

When You Should Use Aperture Mode

1. Use Aperture Mode For PORTRAITS 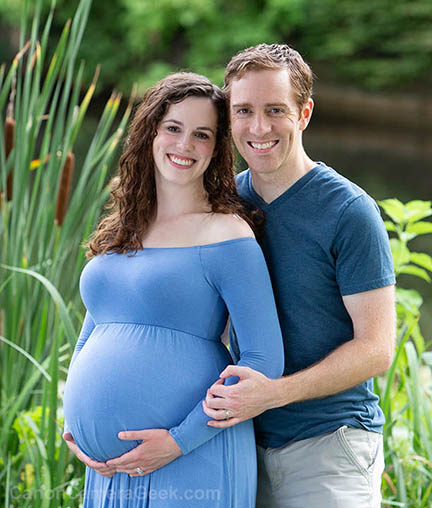 Use aperture especially with portraits of individuals (or an expecting couple), where you want your subjects to be in sharp focus and your background to be pleasantly out of focus.

You can use aperture mode and a low f/stop to blur the background. Notice this maternity portrait.

These parents-to-be were positioned so that their eyes are the same distance from the camera.

Using aperture priority mode, a telephoto lens, an f/stop of f/3.5 and focusing accurately on their eyes insures they'll be sharp and the background will blur nicely.

Aperture mode is also a good fit for using when you're photographing a larger group, but for the opposite reason. You want everyone to be in sharp focus. 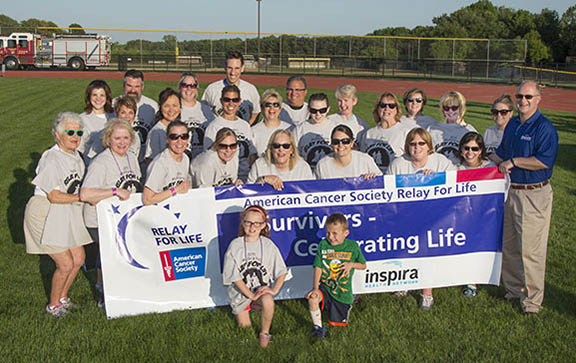 Smaller aperture to get everybody in focus.

If you're photographing a large group of people and some are close and some are more distant from the camera, you need to "stop down" to a smaller lens opening to increase that depth of field so that all of your subjects are in sharp focus. 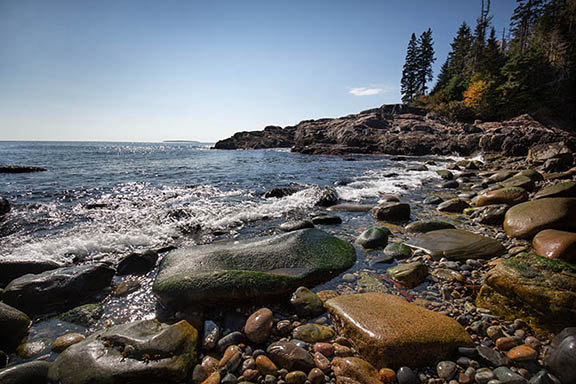 Aperture was set to f/13 to have everything in focus.
16mm wide angle lens.

Including near and far objects in a landscape photograph creates a visual pathway for your eye to travel. I wanted everything to be in sharp focus in the photo above. The super wide angle lens creates a strong perspective.

There are also other situations in landscape photography where you want to visually separate your subject from either the foreground, background or both by limiting the sharp focus area to just your main subject.

See the example below of what happens when you use a large aperture for photographing a close-by subject with a distant background. 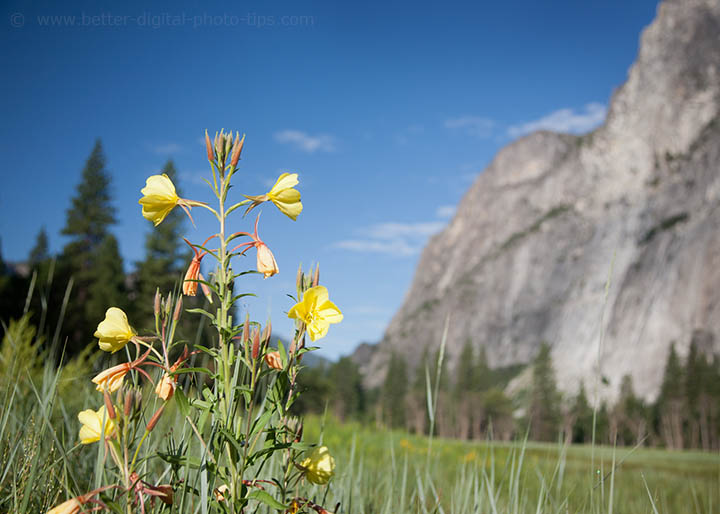 I used a large aperture to blur the background

While doing some landscape photography at Yosemite, I took a different approach at photographing the often photographed El Capitan. I decided to make it the background and put the focus on the yellow flowers contrasting with the beautiful blue sky. I used aperture priority and a large aperture.

For an additional popular setting for shooting landscapes see the post on Canon Picture Styles.

When shooting macro photography the depth of field is extremely limited. Sometimes you may want that effect for creative purposes. In other situations you may want to "stop down" all the way to the smallest possible aperture (largest f/stop number) to get as much depth of field as possible. 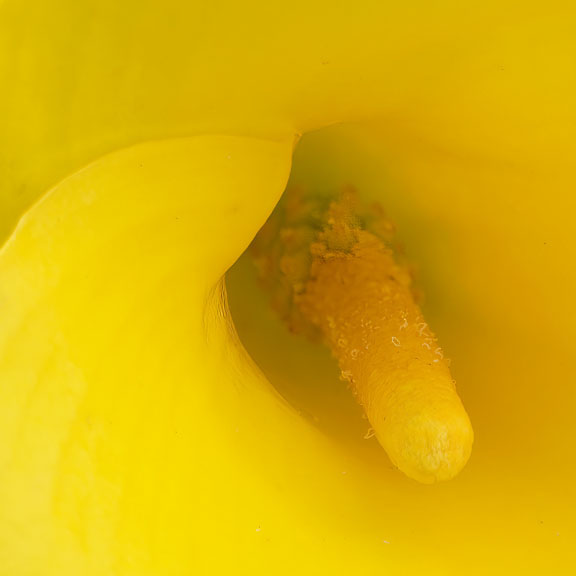 In the photo above I wanted to get the entire pistil (center part) of the flower in focus, so I used aperture priority with the aperture set to f/18.

When shooting macro photographs it's a good idea to use aperture priority and take several different f/stop setting versions of your composition and look to see the different effect you get with each different aperture. You'll get a nice variety of background and foreground blurring.

When Not To Use Aperture Mode

There are times when using shutter priority or manual mode make more sense than keeping your Canon camera set to aperture priority mode. These include situations where the length of the expoure is the most important setting to control

1. No For SPORTS/ACTION PHOTOGRAPHY

Aperture priority is generally not used when you want to use a shutter speed that is fast enough to freeze the action. Each specific type of sport or speed of the action has a corresponding shutter speed need to eliminate blur from motion.

Generally for sports, action, and rapidly moving wildlife (including birds in flight) you'll want to set your camera to shutter priority mode and set the camera at a specific speed. For recommended speeds see the article on shutter mode.

When you're shooting indoor photos with flash as the main light source aperture priority is not a good setting to use. Shooting outside photos when it's dark is also not a good time to use aperture mode.

Manual exposure is the better choice for nighttime photos and you're usually using a tripod becasue of the longer shutter speeds required. 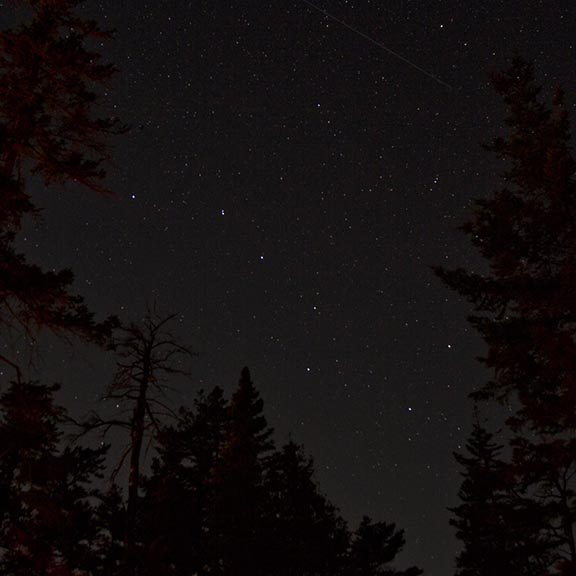 I shot this photo of the Big Dipper at f/4 for 25 seconds.

Don't use aperture priority when you're shooting long exposures for creative effects. You'll want to use either shutter priority or manual mode. In these shooting situations you want to control the exact shutter speed for the specific effect you're going for.

For instance, I shoot waterfall exposure for between 1 and 10 seconds depending on the amount and flow rate of the cascading water in my composition. You have to use "bulb" mode when star trails where exposure can be several minutes or more long. Aperture priority has a maximum shutter speed of 30 seconds.

How To Change Aperture On Your Canon

In order to change your aperture setting on your Canon camera you need to know where it is. Then it's simply a matter of rotating a dial or a wheel, or touching the right spot on the LCD panel on the back of your Canon.

Canon produced this short, but helpful video on aperture. It starts right away with the goo information and avoids the fluff in the beginning. Enjoy!

I hope this post was helpful in explaining why aperture is so important and when you should use aperture priority as a setting. Keep your curiosity high and have a blast shooting your Canon.