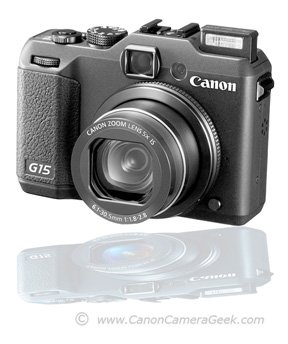 It took a while for Canon to announce the replacement for the premium compact camera known as the Canon g12. The Canon Powershot G15 camera was released  in September, 2012, exactly 2 years after the release of the Canon G12.

Here are the details on the biggest changes from the Canon g15 compared to the g12: 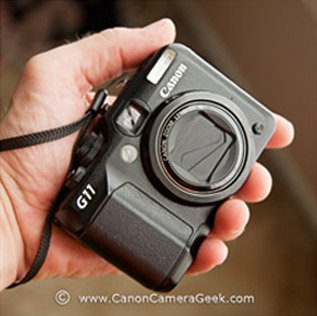 Like the G11, the G15 is sized to easily fit in the palm of your hand or in a decent sized pocket.

STATIONARY LCD SCREEN.  Why did Canon take away this handy feature? I really like the swiveling LCD panel that my Canon g11 and the g12 have. It's not something you use a lot, but taking any photos of yourself with friends is so easy.

The swiveling LCD screen also lets you hold the camera up high above the crowd or down low near the ground and still see what you are photographing on the LCD screen.

SMALL SENSOR. The Canon g15 has a nice maximum ISO setting which is great for low-light situations. However, at these super high ISO settings image quality is less than you'll get with one of the larger sensor Canon DSLR cameras, like the APS-C Canon 90D or full frame 5D Mark III.

This Canon Camera News-Canon g15 announcement was perhaps a little overdue, but well worth the wait for enthusiasts of premium compact cameras. For someone who is looking for a "Premium Compact Camera" as Canon calls their "g" series of digital cameras, The g15 might be the best Canon camera.