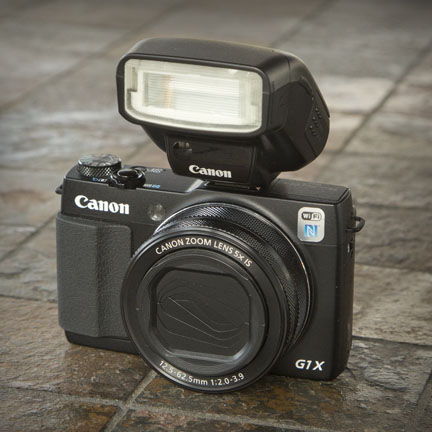 Getting high speed sync with the 270EX II Speedlite isn't that tricky and the rewards are strong.

There are certain situations where your photo will really benefit from using high speed sync and this post gives you the simple 4-step method to setting your camera for high speed sync.

In full sun, flash fill-light will give you a good balance between your subject and the background.  In the photo below, the sun was very bright. It was high in the sky and slightly behind my subject.

what is high speed sync

Setting your camera to high speed sync gives you the ability to use flash at a faster than normal shutter speed. Your camera normally has a maximum shutter speed (usually about 1/250 second) where the shutter is fully open when the flash fires to get a good exposure. High speed sync causes the flash to rapidly fire multiple times through the super fast shutter opening to get even exposure throughout your photo.

High speed sync is great for super bright situations where your camera has to use a fast shutter speed to avoid over exposure. It's also great for controlling the balance (the ratio) between the natural light of the environment and the light coming from your flash.

Your Canon Speedlite 270EX II is not super powerful, so limiting the light from the environment with the shutter speed enables your flash to contribute  a higher percentage of light to the scene. 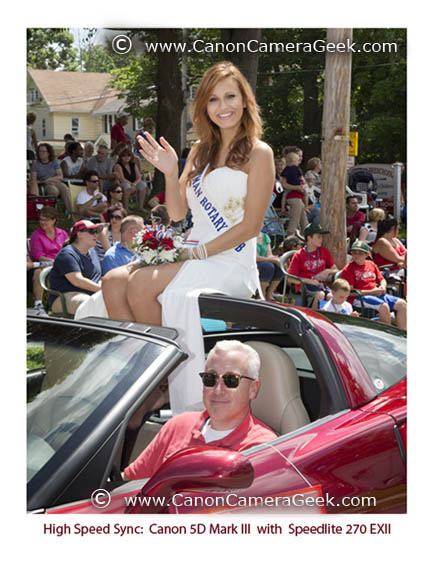 This was taken during a moving parade following a beauty pageant and there was no time to play with exposure while my subject was being driven on the back of this corvette.  I needed a high shutter speed to freeze the action and get a good ratio between the fill light provided by my Speedlight and the light from the overhead sun.

As a portrait photographer and sometimes a bit of a lighting snob, I usually find shaded areas and use bounced fill light as apposed to artificial fill light from a flash when shooting portraits.

It's a bit cumbersome to get deep enough into the 5D Mark III menu to find the high-speed sync setting which is used in Shutter Priority Mode.  Aperture priority mode has a limit of 1/200 second for the fastest sync speed which as it turns out I could have used in this photograph.

I set the camera well ahead of time and took a few test photos before my subject appeared, coming down the street and waving to the crowd.

I included the four photos below in order to illustrate how you get to the high synchronization setting with the Canon Speedlite 270 EX II and 5D Mark III combo.  The 580EX and EX II have the high speed sync settings built-in to the flashes and are easily accessed on their menu screens.

The Canon Speedlite 270EX II is a very simple and small flash without a custom function screen or a menu but I love it's size and portability. High speed sync with your 270EX II flash gives you so much more flexibility in creating good lighting.  How you use it depends on each situation very specifically.